These options define how the output file(s) is named and where it is saved.

Directories will be created by exrTrader if required.

The file names can either be absolute, or relative to the Output Path

This defines the base path for all written images. You can either use the path defined by LightWave 3D or select your own.

You can only select an output path if Use Prefs Render Path is not activated.

If you select this option, exrTrader will use the output file defined in the Lightwave3D render globals.

This option is quite important if used across a render farm in conjunction with the OpenEXR Dummy Saver, described later in this manual.

This control allows you to select an output file for the buffer saver to write to. The file name extension will be automatically removed, but is then added when saving. exrTrader supports special variables in the path name that will be replaced as the image is being saved.

The currently supported variables are:

You can use the Review Settings… option to verify if the file names are created as you'd expect them to be.

This control allows you to define the output file names for layers saved as separate files. The options are identical to the Layered Output File, the %buffer% / %layer% variables contain the name of the current layer. 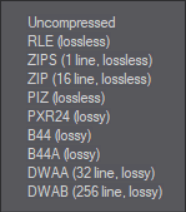 Most compression options are lossless, with the exception of PXR241), B44/A and DWA A/B.

exrTrader is compiled to support OpenEXR Version 1.2, which includes the following compression modes:

These are explained in more detail in the Technical Introduction to OpenEXR, available as a PDF at www.openexr.com 4).

This is a floating point value to set the strength of the (lossy) DWA compression. The control is only available if either DWAA or DWAB are selected as a compression.

1)
which is lossy when saving 32bit float image data (it cuts off the lower 8bit, effectively cutting the precision to 24bits)
2)
DWA has been created by Karl Rasche and is patented by DreamWorks Animation, but available to use within the OpenEXR standard
3)
The channel names need to be capitalised
4)
I admit it, I didn't want to copy and paste the section over from the OpenEXR website.
The document is highly recommended to understand the capabilities of OpenEXR.
← Show Buffers Preview (Image Viewer)
exrTrader (Pro) User Manual
Cryptomatte (exrTrader Pro only) →
exrtrader2018/output.txt · Last modified: 2019/01/25 12:21 by lightwolf