This deformer takes a series of morphs and applies them as a chain, using TCB splines to interpolate between them.

Basically every morph is treated as a TCB spline keyframe for the vertices. 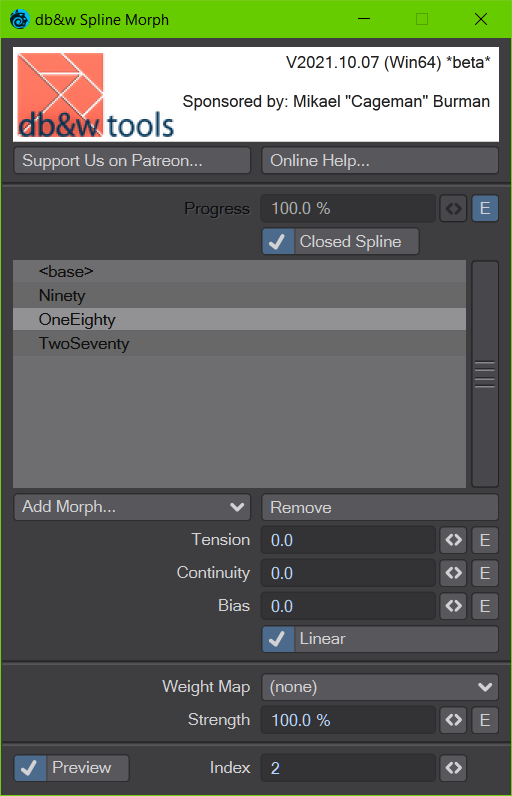 Current progress for the morph. 0% is the morph at the start of the list, 100% the end - regardless of how many items are in the list.

The spline defined by the morph maps will be treated as being closed, it wraps from the last morph map to the first morph map in the list at 100%.

At least two entries need to be in the list for the plugin to work.

The entries may be re-ordered by dragging and dropping individual items.

Selecting an item in the list will make the respective spline controls below available for that morph map.

Sometimes the selection isn't synchronised with the spline controls due to SDK limitations. If in doubt, just select a morph map in this list again.

This open a pop-up with all morph maps contained in the current scene. Selecting on will add it to the bottom of the list of morph maps.

Removes the currently selected morph map from the list.

Controls for the incoming TCB spline, these are the same as TCB controls in the graph editor.

A weight map can be used to control the strength of the spline morph.

This value directly changes how strongly the spline morph is being applied. This value is multiplied by the Weight Map if applicable.

Activating the preview will show the spline curve for a single vertex of the mesh. The Index control determines which vertex is being previewed.

The preview if only visible if the object is selected in Layout.

The sample content includes a scene called SplineMorphPlugin.lws that shows the basic use of the plugin.

This plugin is our Plugin of the Month for July 2021, made possible by the finest patrons on Patreon.