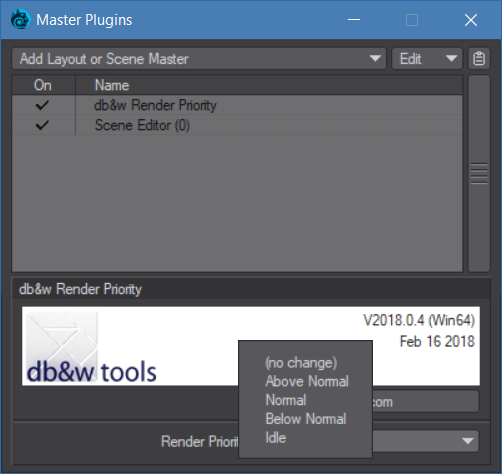 This Master Handler plugin changes the process priority of Layout while rendering.

Especially with many core, Layout can really tax the system making it hard to use other applications while it is rendering.

Lowering the priority while rendering can help alleviate the issue. The downside is that renders will take longer, depending on the other running tasks.

This is a Layout plugin - it is not saved with the scene but with the current installation of Layout. Any Layout session will have this plugin applied automatically. It does not affect rendering on a render node.

Use while VPR is active

This will also change the Priority of Layout to the value designated above if VPR is active. By active we mean, if VPR is being used in any viewport.

Since there is no way to detect if VPR is actually rendering, checking for existence of a view using VPR was the only way to make this possible.