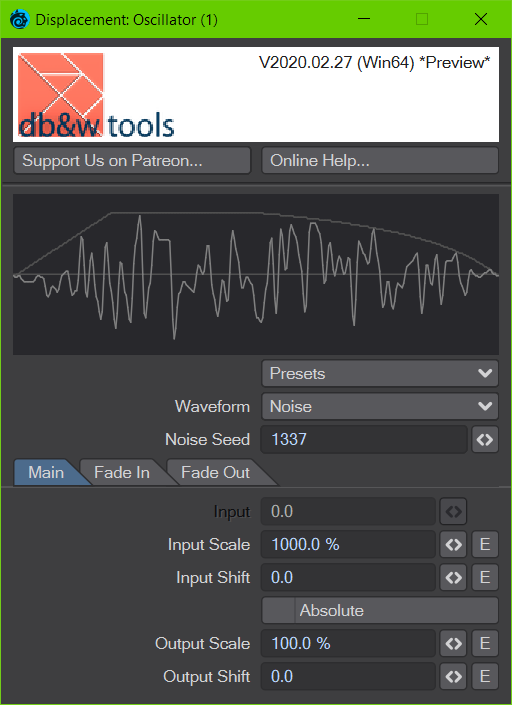 The Oscillator nodes provides multiple waveforms as a scalar, including options to fade them in our out.

It can be used to deform meshes using a position or distance as an input, but also to influence an animation by using time as an input.

It is also available as a Channel Modifier.

The Preview displays the current curve (if possible) from the start of the Fade In to the end of the Fade Out.

The shape of the influence due to the Fades is also shown as a slightly darker curve.

This uses the shared Preset System to save and load settings for this node. 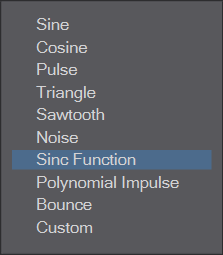 This control is only available if the waveform is noise. The seed controls the randomness of the noise function, different values result in different noise.

This control is only visible if the waveform is Polynomial Impulse.

It controls the spread of the impulse, values above 1.0 are recommended.

The input used to drive the waveform. Usually it's either driven be the nodal input or an envelope.

This value multiplies the input. In most cases that will change the frequency of the waveform, higher scales increase the frequency.

This value is added to the input (after it has been scaled). This allows for shifting the waveform.

This setting flips all negative values to be positive.

This setting multiplies the output scalar.

The output shift is added to the output scalar after it has been scaled.

Fade In / Fade Out

These two tabs control the fade in/out of the waveform.

Either of these need to be manually enabled. If they are enabled, the node will add additional nodal inputs. These are removed again if the fade is disabled.

The start and end values are unit-less and depend on the input. If the input is frames, it's frames. If it's time it's seconds, if it's a distance it's metres and so on.

The starting value where the fade starts.

The end value for the fade.

The starting amplitude, or scale, for the fade.

The ending amplitude for the fade.

This allows you to adjust the shape of the fade. Gain acts in a way similar to a gamma curve.

This also adjust the shape of the fade, a lower bias will shift it to the left, a higher bias to the right. 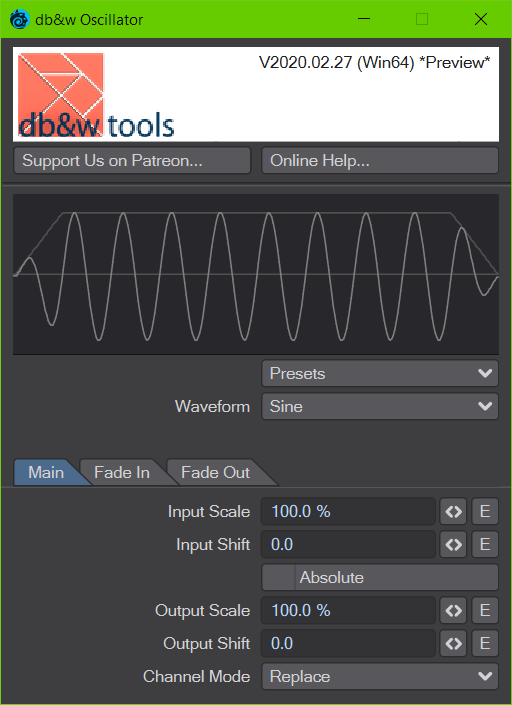 The Oscillator is also available as a channel modifier. It is almost identical with the following caveats/exceptions:

All motions courtesy of multiple Oscillator nodes - by https://twitter.com/markWarnerTV

This is the plugin of the month for February 2020, made possible by the finest patrons on Patreon.