The Multi-Mixer node allows you to weigh multiple inputs to create a single output. This is similar to how the Morph Mixer works, but as a node.

They all work the same way and only accept different connection types.

The Normal Multi-Mixer takes care of subtracting the smooth normal from the normal inputs first, then adds up the inputs and finally adds the smooth normal and normalises the result. This allows for the proper mixing of modified normals. 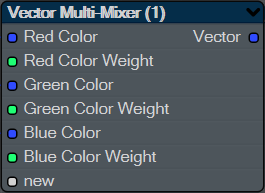 If you add any of these nodes to a node graph, there will only be a “new” input. Drag from any compatible output you'd like to connect to this new input and a new matching input will be created.

The <name> 1)of the input depends on the name of the output that was dragged from. A second input called <name> Weight will be created as well. This also creates a percentage control in the panel of the node. The Weight input and the control allow you to control the weight of the specific input.

You can use the node menu (Right mouse button → Node Menu ) to either rename or remove an input. You can either click on the main input or the weight input.

Unofrtunately, due to limitations in the LightWave 3D SDK, the GUI panel can not update immediately if inputs are added, renamed or removed.

You will need to to manually close and open the panel (if it's a separate panel) or click next to the node and then on the node again (if the panel is embedded on the right side of the node editor) to refresh the GUI. 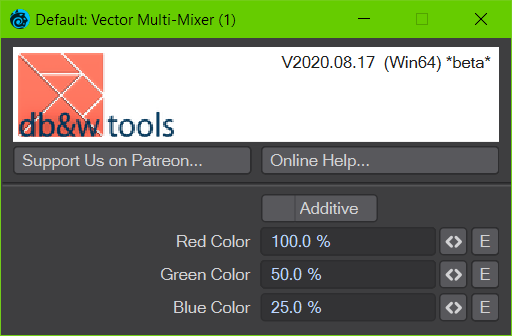 Normally, the individual weights for the inputs are averaged to a total of 100% 2) and then applied to their inputs respectively.

If Additive is active, the inputs are multiplied by the displayed weights and added up without being normalised to 100%.

<name> is a placeholder for the input this percentage is related to.

The percentage determines the weight of the <name> input when the output is computed.

The sum of all weights may be more than 100%, in this case all weights are reduced to produce a final result of 100%. If Additive is active, this doesn't happen and the inputs are just added up.

This is the plugin of the month for August 2020, made possible by the finest patrons on Patreon.