This node allows switching between a pair of inputs depending on the value of the boolean input.

This inverts the value of the boolean input, effectively switching the inputs of the pairs.

When the node is first launched, there is only one connection called new.

If you connect any output from another node to this input, it will create a pair of inputs as well as an output on this node. 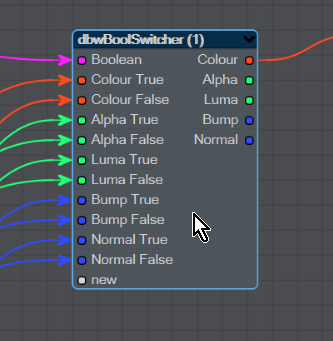 Depending on the state of the boolean value, either the “True” or the “False” input will be passed through to the output.

You can add multiple inputs/outputs to the node - which may also have different types.

To remove a set of inputs/output, right click on either the respective input or output and chose “Node Menu → Remove…”.

This is the plugin of the month for January 2019, made possible by the finest patrons on Patreon.