The Converter will convert any image that LightWave can load using plugins 1) into an ECW/JPEG 2000 image, ready to be used within infiniMap. 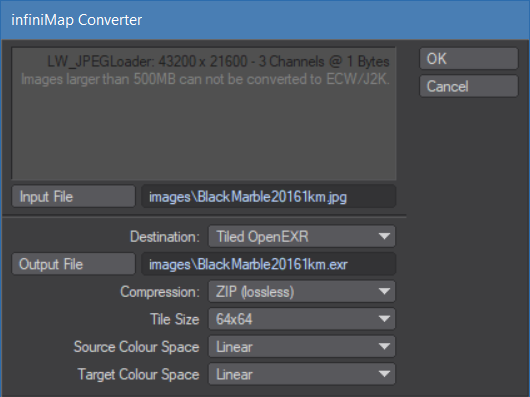 Due to licensing restrictions the Converter is limited to a maximum source image size of 500MB 2) when converting to ECW / JPEG 2000 images. InfiniMap Pro can read much larger images created in other applications though.

Converting to OpenEXR images is not limited in size.

This converter panel will show up when you attempt to load an image that is not native to infiniMap into one of the infiniMap plugins.

Here is a short description of the controls:

This area just displays some information about the source image, mainly the channels used (as returned by LightWave)

The converter can use two different types of source images.

You can load an image from a file. This can be a ECW, JPEG 2000 or OpenEXR image. The converter also supports loading any type of image that LightWave 3D provides a plugin for (this doesn't include Targa, FLX and IFF, which are native to LightWave 3D).

PNG images that are not interlaced are also loaded and converted natively by infiniMap, reducing the memory usage tremendously compared to using the native LightWave 3D PNG loader plugin.

If you load an image that uses the LightWave 3D plugins, infiniMap will need to create a temporary file first. This file can be rather huge (it is uncompressed) and stored in the default temporary directory of the computer. The file is deleted after conversion.

The conversion itself will use as little memory as possible, converting one scanline after the other. This conversion process is multi-threaded.

If you pick an OpenEXR source image file, all layers and channels will be preserved.

You can also convert an image that is currently loaded into LightWave 3D. If you select this option you can pick one of the loaded images as a source for conversion.

Here you can select a file to use as the source image if the Source is set to From File.

This pop-up allows you to pick an image loaded into LightWave 3D as a conversion source if the Source is set to Loaded LightWave Image.

This option allows you to select the kind of output image and will then display the relevant options.

The file name extension of the output file determines if this option writes out a ECW or a JPEG 2000 image.

Call your file <filename>.ecw to convert to an ECW image.

JPEG 2000 files are a standardized, cross-vendor image format that can be read by other applications as well. It can also supports lossless compression.

ECW on the other hand is an image format developed by ERMapper and is mainly designed for geodata. The compression is always lossy. However, it is slightly faster to compress and decompress compared to JPEG 2000.

JPEG 2000 supports lossless compression. Set the Compression Ratio to 1:1 to compress without loss.

Tiled OpenEXR images are a special flavour of OpenEXR images. Basically the image gets split up into small tiles that can be read independently of each other. The tiles are also stored in different resolutions.

If you select an OpenEXR image as the source for the conversion it will be converted with identical channels and layers (but tiled).

OpenEXR offers a variety of compression modes, we recommend ZIP.

Doesn't compress the data at all, recommended for highest speeds (if the hard drive is fast) - but also uses the most storage space.

Compresses the difference between adjacent pixels. Fast to compress and decompress, but in general only works well for images with large areas of solid colour.

This uses a ZIP type compression scheme to compress one scanline at a time. Slow to compress, fast to decompress and also offers a fairly high compression ratio.

Just like ZIPS, except that it compresses 16 scanlines in one go. This results in a slightly better compression compared to ZIPS, but also slows down reading single scanlines from an image. We recommend ZIP for non-grainy images (or images with little grain).

This is a wavelet based compression scheme that has a compression ratio that is comparable to ZIP(S), but is faster to compress … on the other hand it is slower to decompress. PIZ is recommended for grainy images.

A wavelet based compression scheme similar to PIZ, 32bit float numbers are cut off to 24bit, losing 8 bits of precision.

A compression scheme designed for the real-time playback of OpenEXR images with a constant compression ratio.

Just like B44, but solid areas (such as alpha channels) have a better compression ratio. These are explained in more detail in the Technical Introduction to OpenEXR, available as a PDF at www.openexr.com. 3)

This determines the size of the tiles in the tiled OpenEXR images. Larger tiles allow the compression to be more effective, reducing the final image size. They are also slightly faster to load and decompress.

These options allow you to convert a (non-linear) source image to linear during the conversion. This is especially useful if the destination image is a tiled OpenEXR image and you work using a linear work-flow because it saves on CPU time that would otherwise be needed to convert the image on demand during a render.

This opens a file requester allowing you to pick an output file.

This will finally convert the image. Depending on the image size and CPU speed this may take a couple of minutes. A progress window is displayed during the conversion, and infiniMap will also display some statistics after the conversion has completed.

1)
Unfortunately this excludes TGA, FLX and IFF which are both loaded natively by LightWave 3D
2)
The 500MB refer to the raw, uncompressed size of the image. This can be computed using the following formula:
width * height * number of channels * depth per channel in bytes.
For example, an image that is 1920×1080 pixels large, contains 4 colour channels (i.e. Red, Green, Blue, Alpha) using 8 byte each (for 256 different shades per channel) would be:
1920 * 1080 * 4 * 1 = 6220800 bytes, which is 5.9 MB (divide twice by 1024 to convert from bytes to Megabytes).
Fortunately infiniMap does that math and will warn you if the 500MB limit is exceeded.
3)
I admit it, I didn't want to copy and paste the entire section over from the OpenEXR website. The document is highly recommended to understand the capabilities of OpenEXR.
4)
At least as far as infiniMap compresses them. JPEG 2000 is specified for higher bit depths but implementations using those are rare.
← infiniMap Browser
infiniMap User Manual
infiniMap Batch Converter →
infinimap2018/converter.txt · Last modified: 2017/12/27 10:41 by lightwolf