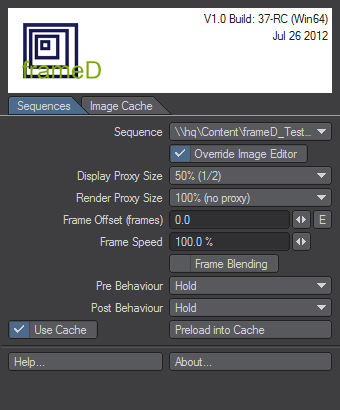 The settings are saved with the scene and respected in Screamernet as well 1).

The Sequences tab hosts the individual controls for specific sequences. The Image Cache tab host the controls responsible for managing the image RAM cache which is used both by Layout as well as Screamernet.

The following controls are available:

This allows you to select the loaded frameD sequence to edit.

If this setting is turned off then the sequence playback is controlled by the settings in the image editor.

If it is turned on then the following controls are enabled, the sequence playback is controlled by them.

Please note: If this setting is turned on then the post-behaviour of the loaded frameD sequence needs to be set to Loop in the image editor.

This sets the scale of the images loaded by the sequence when working interactively in Layout. Proxies will be created transparently by the frameD loader and stored in a subdirectory next to the images used in the sequence.

If proxy images exist on disk (and are more recent than the image file) then those will be loaded directly to speed up interactions in Layout.

This sets the scale of the images loaded by the sequence when rendering. Proxies will be created automatically by the frameD loader and stored in a subdirectory next to the images used in the sequence.

If proxy images exist on disk (and are more recent than the image file) then those will be loaded directly.

This changes the offset of the sequence. The setting is in frames and can be enveloped.

To directly control which sequence frame is loaded, at which time in Layout, use the envelope. If an envelope is used to define the offset, then the Frame Speed as well as the Pre- and Post-Behaviour will be ignored and the respective controls disabled.

This changes the speed of the frameD sequence. The sequence will always be loaded at the scene FPS settings.

This setting determines how frames are handled when loaded before the starting frame of the sequence (which could be due to a negative current frame or a changed Frame Offset).

This setting determines how frames are handled when loaded after the end frame of the sequence.

Frame Blending blends frames in the image sequence to smooth the transition between. If a sequence contains an image at frame 0 as well as another frame at frame 10, Frame Blending will gradually blend from one to the other over the course of the frames 1 to 9.

This allows the current sequence to use the image cache if it is enabled. This setting is on by default.

This loads all images that are a part of the current sequence into the cache.

The size of the cache will not be increased automatically if they don't fit, instead, the images that have been used the least will be purged from RAM.

This opens a panel with short descriptions of the controls and associated functionality. You can leave it open as a reference.

Displays detailed version information as well as credits for frameD. 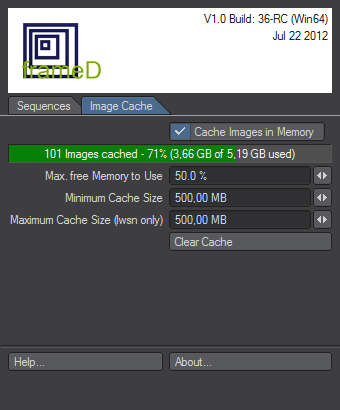 The Image Cache stores used images in memory to allow for faster scrubbing within Layout. It also speeds up sequences that perform frame blending or the use of multiple sequences that refer to the same images on disk. If the memory limit of the cache is reached then the least recently 2) used images will be removed from the cache.

This switch turns the image cache on or off for all sequences.

If it is off, then image caching is completely disabled.

The amount of memory used by the cache is controlled by the following settings.

Max. free Memory to use

This determines the largest amount of memory that the cache may use. It is a percentage of the available (free, physical) memory on the workstation.

This allows the cache size to adapt to the amount of installed as well as available memory on the system.

This determines the minimum amount of memory for the cache. It will always provide at least this much memory to cache images.

The control understands the units MB, KB and GB 3) for the cache size. Numbers without a unit are interpreted as Megabytes.

This is the largest amount of memory that the cache may use when rendering in Screamernet.

While there is no interactive workflow to accelerate, it can still speed up rendering if frame blending is used or multiple sequences use the same frames on disk.

The control accepts memory units just like the previous one.

If set to 0 then the cache will be effectively disabled.

This empties the cache to free up memory.

1)
Obviously, only the Render Proxy Size will be used when rendering in Screamernet.
2)
Which is just a fancy way of saying: The oldest images are removed.
3)
Actually, just the first letter is taken into account here. i.e. “1 GB” is interpreted as one Gigabyte, as is “1gb” or even just “1g”.
← frameD Editor
frameD User Manual
Keyboard shortcuts for the editor →
framed2018/master_plugin.txt · Last modified: 2017/12/27 10:40 by lightwolf