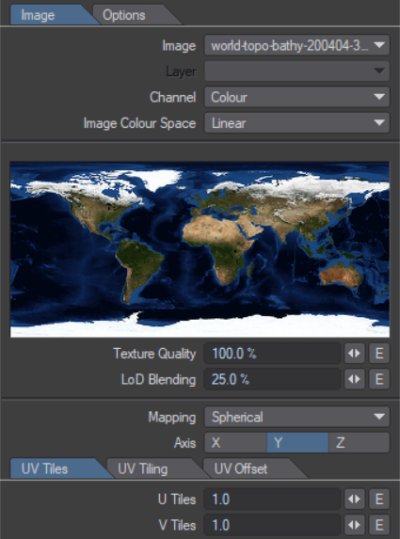 Both the procedural and the nodes use many common elements in their user interface 1).

The common user interface elements used by both plugins, from top to bottom, are:

These are explained in more detail in the following sections.

infiniMap supports all projection types that LightWave3D provides to normal image maps. Unfortunately, due to limitations within the SDK, UV mapping is only supported by the infiniMap shader and nodes.

The projection types are:

Each one of these behaves exactly like the matching image projection type in LightWave 3D. infiniMap also supports all the options, such as the UV tiling amounts and UV wrapping modes etc.

Please refer to your LightWave 3D documentation for more information on the projection types. 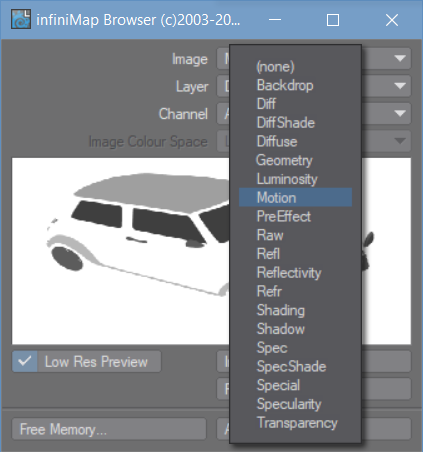 This pop-up menu works just like the image selector in the image texture layer provided by LightWave.

You can use it to select any of the currently loaded infiniMap images or load a new one.

If you attempt to load an image that can't be used natively by infiniMap, but can be converted using the Converter, infiniMap will open the Converter for you. You can then change the settings, convert the image and the result will be loaded into infiniMap.

Loaded images actually do not use any memory until a render process is started, this can be a preview (including the preview sphere in the Surface Editor) or a final render.

infiniMap keeps track of the usage of the images. If no plugin actually uses one of the images in this list, the image is automatically removed from the list 2).

infiniMap EXR will not allow you to pick a ECW/JPEG 2000 image, but you can still load, save and render objects that use ECW / JPEG 2000 images (except for the OSX version).

OpenEXR can store multiple layers in a single image file.

If the selected image contains more than one layer you may pick one of them using the Layer Selection. The Extended Node even allows accessing multiple layers at once.

Unlike LightWave 3D, infiniMap allows you to specify which channel of an image you wish to use for texturing. In some instances it may be useful to just apply the red channel as a bump map for example. This feature also allows you to just use the alpha channel of a RGBA image to mask out other textures for example.

The channel selector has to do a bit of guessing as to how to interpret the bands/channels stored in an image file. If there are 3 bands, it assumes them to be RGB in that order, if there are four it assumes that the fourth band is the alpha channel. Single channels are always available as luminance / grey scale values.

Images with three or more channels, such as RGB images, will also be able to output two additional “pseudo” channels that infiniMap can generate on the fly. These are:

This control allows you to select the colour space that the image has been stored in. It will affect colour channels only.

The Image Colour Space setting is not per plug-in but stored per image.

If you have an image loaded, the image preview area will display a small thumbnail of the image.

If you have no image loaded, the image preview area will display the infiniMap logo as well as the version number of infiniMap.

Note: Due to a glitch in the LightWave 3D SDK, in Modeler the image preview area is not available for the procedural texture.

If you select the Options tab you will be able to access some bonus functionality of infiniMap. The options visible depend on the plugin type, some options may not always be available.

Also, some options may only be visible if an image is actually selected in the Image Selector.

The Options are available in the procedural texture and the shader.

In the procedural interface some of the option names had to be shortened due to space constraints. 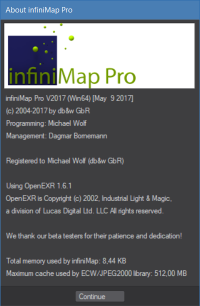 This displays a panel with the credits for infiniMap, as well as the version number and the date the plugin was created.

The version information is quite handy when you require support and check for updates.

As an additional note, we would once again like to thank our trusty beta testers for their patience and support. The “About infiniMap” panel will also display the total amount of memory used by all images handled by infiniMap. This is especially handy if you're working with FPrime.

It will also display the maximum amount of memory that the libraries used to handle JPEG 2000 and ECW images may use to speed up access to the image files on disk. This value is adapted to your actual RAM usage. The more available memory you have, the more memory may be used and vice versa.

Please note: this is a maximum value, and infiniMap is likely to actually use a lot less than that.

This is a quick way to access the infiniMap Browser from within the Shader or the Procedural Texture plugin.

This is a quick way to access the infiniMap Converter from within the Shader or the Procedural Texture plugin. 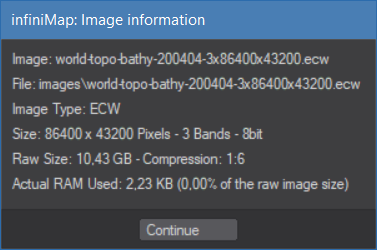 If the user interface displays a preview image, this option displays more verbose information about the loaded image.

This option allows you to globally replace the currently visible image. A file requester will open to allow you to select a new infiniMap image.

This menu item allows you to create a preview layer, or, if you have already done so, updates the parameters of the preview layer to those of the current instance of infiniMap.

Please note: For the creation of an OpenGL proxy layer to work in the shader, you will have to manually activate the texture layers of the surface (just click once on the [T] button next to the base colour of the Surface). Unfortunately infiniMap can not automatically do this yet due to limitations of the LightWave SDK.

Defines the size of the final image used by the OpenGL proxy layer. These sizes match the texture size options available in LightWave 3D.

These are some common presets for OpenGL preview textures.

This is the file format used to save the file to disk.

Allows you to change the name of the preview image file. Make sure that it contains the name of the infiniMap image as stated further above. Currently you will also have to type in the correct file name extension manually (this makes no difference to LightWave 3D however).

If you activate this button, instead of creating a new image file you can use an existing image file that has been loaded into LightWave 3D.

This item allows you to pick a loaded image to use as a preview image instead. Please note that the same naming rules apply for the image file for infiniMap to recognize the OpenGL preview layer.

Sometimes you just wish to create a small version of the cur­rently loaded infiniMap image, or create a proxy layer manually.

Create OpenGL Proxy Image allows you to do that without actu­ally creating an OpenGL proxy layer within LightWave 3D. The user interface controls have the same functionality as in the Update/Create OpenGL Preview Layer panel.

This control is only available in the texture layer plugin. It allows you to copy the applicable settings of a LightWave 3D image layer to the current infiniMap layer.

It will optionally also convert and load the image texture used by the original image layer.

Previews rendered with infiniMap can take a while to start because infiniMap needs to read the disk based image files for each rendering process.

This includes rendering the preview sphere in the Surface Editor and VIPER.

To speed up preview renders, you can turn on the Lores Preview option (which is active by default). It basically reduces the Texture Quality setting by a fixed amount, which in turn means infiniMap doesn't need to read as much data from disk for every preview render.

Final LightWave 3D renders are not affected by this setting at all. We recommend you leave Lores Preview on to maximize interactivity while surfacing. For fine details, or FPrime renders it should be turned off. This menu items toggles low resolution previews for all instances of infiniMap in the current scene.

infiniMap tries to manage memory as intelligently as possible, however there may be cases where this doesn't work as expected. If you move the camera about, infiniMap may use more memory than it really needs to.

Normally it re-evaluates its memory usage when you change to a different frame but you can also use the “Free Memory…” option to tell infiniMap to release all memory.

Texture Quality defines the resolution of the image texture when applied on the final render. While infiniMap tries to estimate the needed quality depending on a variety of factors, such as the size of the final render or the distance to the camera, this may produce inaccurate results in some cases. This settings allows you to tweak the resolution, and thus the sharpness of the image texture.

The higher the value, the more detailed the image texture will be (within the limits of the image resolution). infiniMap will also use more memory during rendering.

A lower value will blur the image texture more, but also lowers the memory usage.

In most cases the default value of 100% is appropriate, but you might want to tweak it after checking your final render or your memory usage.

When rendering, infiniMap creates a number of level of details (LoD), small parts of the image texture at different resolutions. These are applied to the surface depending on the Texture Quality setting and other factors such as the distance to the camera.

To smooth transitions from one level of detail (or image resolution) to another, infiniMap blends the level of details. LoD Blending specifies over what range this blending happens.

The higher the value, the more memory will be used, although the memory hit is not as significant as changing the Texture Quality.

We recommend the default setting. If you can clearly see the different resolutions switch (this tends to be visible in animations, especially with a low LoD Blending setting) you should increase this value.

The useful range of LoD Blending values is between 0% and 100%.

This diagram illustrates the relationship of the UV Offset and UV Tiles options in relation to the UV texture coordinate space. 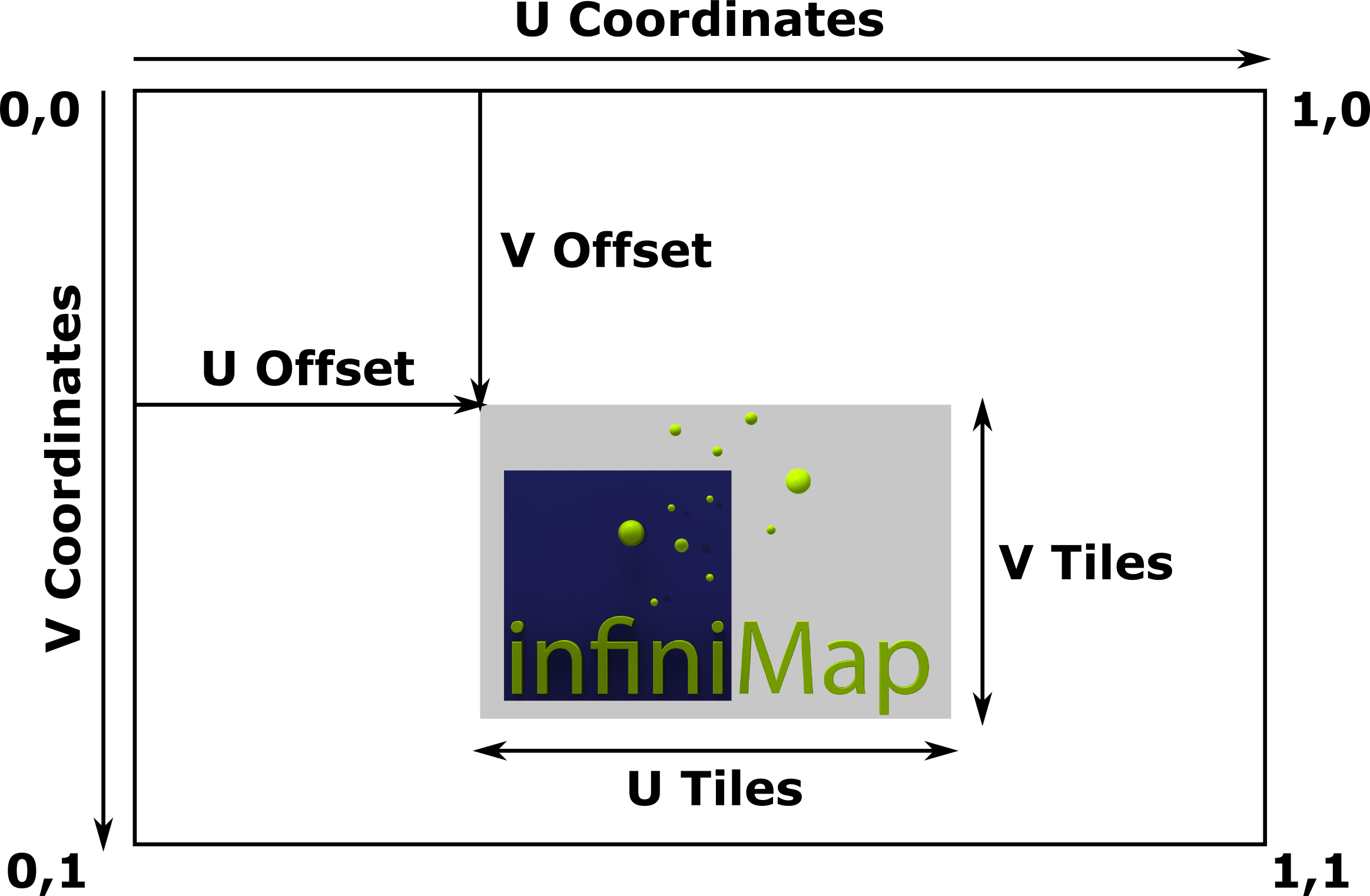 U and V tiles defines how many times the image is projected into the final UV space that ranges from 0 to 1. A lower value means that the image will be smaller, a bigger value enlarges it. At a value of 1.0 the image will fit exactly into the UV space.

The Tiling options define what happens with the image once it is repeated in UV space. The sample images have been created with a planar map, using UV tiles of 2.0 respectively and an offset of -0.25 on U for the Reset and Wrap tiling option.

The UV Offset allows you to position the image in UV space. The value is in relation to the original UV space and does not change if the UV Tiles changes.

1)
Actually, to a large extent they are based on the same source code as well.
2)
As always, there is an exception to the rule: Procedural texture layers, when copied using the 'Copy' button, still hold on to the infiniMap image they use. So you may notice an image being in the list that you're sure isn't being used, because you copied an infiniMap procedural texture layer that uses this image. No worries, next time you 'Copy' a texture layer, or restart LightWave 3D, it will be gone.
← Installation
infiniMap User Manual
infiniMap Node →
infinimap2018/common_user_interface_elements.txt · Last modified: 2017/12/27 10:41 by lightwolf