qckHuD is an addition to qckPck that will displays a variety of information about the current scene as well as items as an overlay.

The type, location and colour of the information can be configured.

qckHuD is a master plugin that is saved with the scene. It comes with four generic plugins which can be added to a menu or attached to a shortcut: 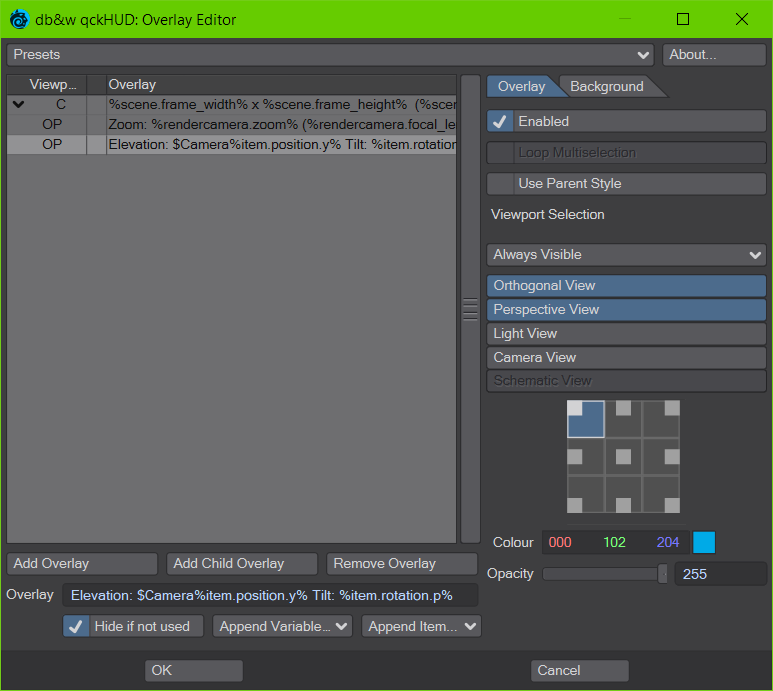 This uses the same presets system as our other plugins: Presets

This displays all overlays. You can drag and drop items to re-arrange them. Hierarchies of items are supported. The Viewport column shows for which viewport types the overlay is being used: Orhtogonal, Perspective, Light, Camera or Schematic view.

The second column shows a rotate icon if the overlay (as well as it's children) will be used for multiple selected items.

The third column shows the overlay text itself.

You can left click on this list to select an overlay item to edit. Right clicking on an item opens a context menu:

This adds a new overlay to the end of the list.

This adds a new overlay as the child of the currently selected item.

Removes the current item. If it has child items, you will be prompted if you really want to delete it, including the children.

This is the text displayed as an overlay. You may include any of the available Variables to dynamically extract data from the current scene.

Hide if not used

If the overlay contains variables, but none of them can retrieve any data in the current context (i.e. light information but you have a bone selected) then the overlay will not be displayed at all and ignored.

This appends any of the selected Variables to the current overlay.

This appends the selected item name as a variable limiter. See Variables for more information.

These controls allow you to edit the individual attributes of every overlay.

This enables or disables the current overlay completely, including children.

If multiple items are selected, this overlay - as well as all children - will be displayed for every selected item.

This option is only available if the overlay is a child. It will inherit all of the following options from the parent overlay item.

This defines when this overlay is visible in a viewport.

This defines which kind of viewport the overlay will be visible at.

Overlays can be positioned along the sides of viewports or the centre.

This defines the colour of the overlay text.

This defines the opacity of the text.

The following controls allow you to enable a background for each of the 9 possible overlay positions. You can also change the colour as well as the opacity.

This selects the background position to edit.

En- / disables the background for the current position.

Defines the colour for the background.

Defines the opacity for the background.

Variables need to be enclosed in % within the overlay, i.e.

Variables related to specific items can be limited to a specific item as opposed to the current selection. This is done by adding the item name in front of the variable, designated by a $, i.e.

If you think that any variables are missing to display the information you need, please get in touch with us and we’ll see if we can add them.