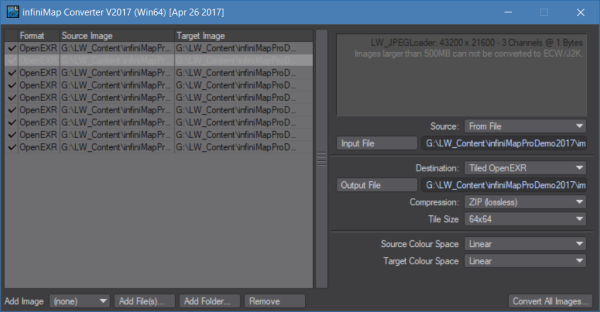 The task list is stored in the content directory between sessions of the batch converter. The task list also remains if you close and restart LightWave 3D.

The buttons at the bottom of the batch converter allow you to:

Add any image that is currently loaded into LightWave 3D as a new conversion task.

This opens a file selector to pick one or more images (using the shift or ctrl key) and adds the respective conversion tasks. If you select more than one image you will be prompted for the conversion settings to be used for all tasks.

The settings correspond to the respective settings in the converter. If you leave the Output Folder blank, the converted images will be saved in the same directory as the selected files.

This will add a complete folder of images to the task list. Other than that this option behaves just like Add Files…

This will remove the currently selected entry from the list of processing tasks.

This will process all conversion tasks.

You will be prompted with a window displaying further options:

This will allow the converter to overwrite existing files automatically. If you turn this off and infiniMap would overwrite an existing file you will be prompted to either allow overwriting the file or not.

This will remove successful conversion tasks from the batch list.